Home / Beauty / How to Have White Teeth in a Week: A Foolproof Guide For a Beautiful Smile 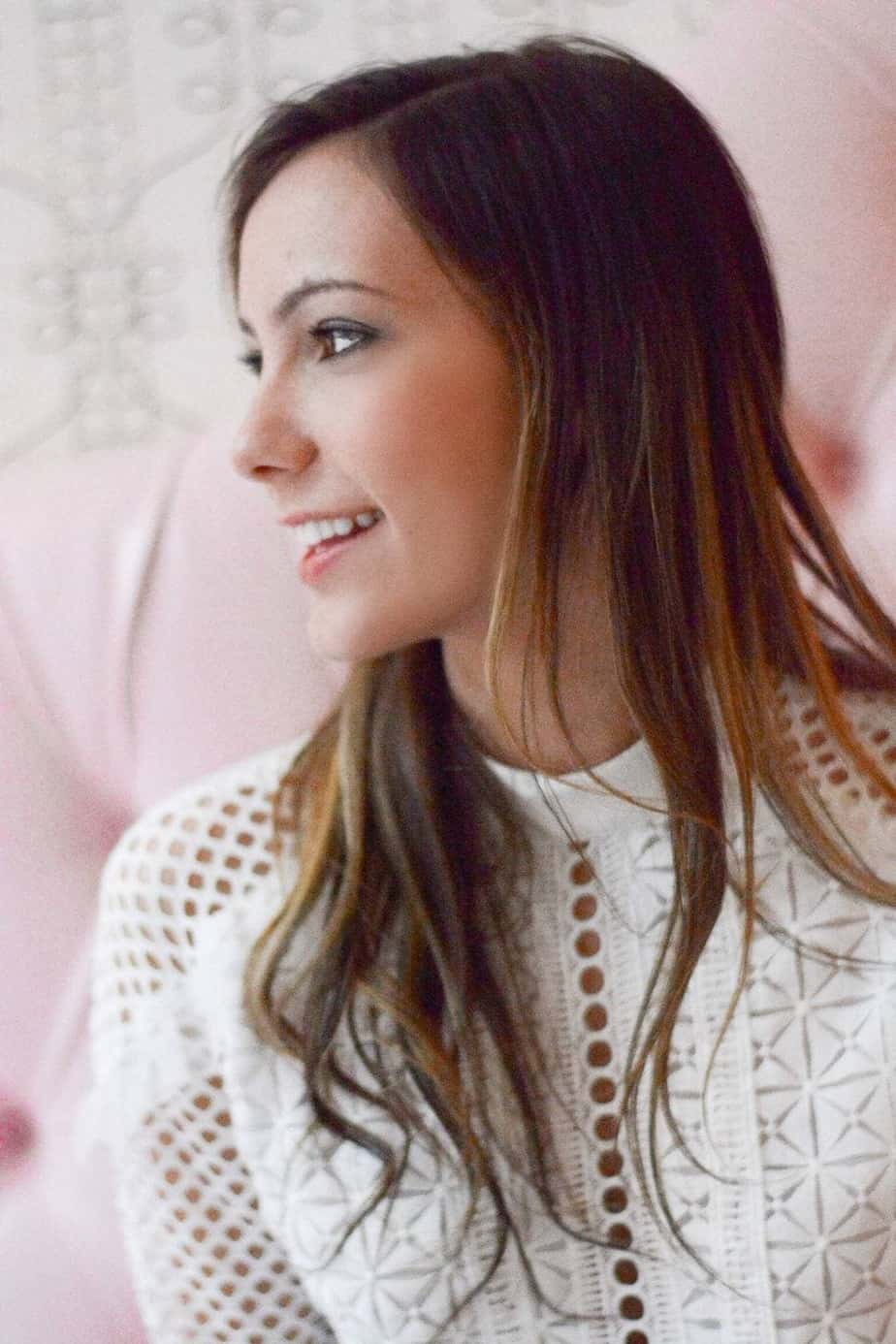 I kind of have a thing with white teeth. When I don’t keep up with my regimen, I just don’t like my smile as much. White teeth make everything look better: your skin looks tanner, your hair more dimensional, and your smile is happier. And let’s face it: we can slap as much makeup as we want on, and your smile is still your most important asset. It’s the thing that genuinely attracts people to you, so why not make it look great?

Yellow teeth are caused by a lot of different factors. Some of them are environmental, such as the foods we eat (this includes coffee and red wine!), but most people will also see a gradual yellowing as they age. The great thing about putting some effort into whitening your teeth is that it looks natural. You can stop wearing makeup and still feel like your appearance looks neat and clean.

I’ve tried laser teeth whitening before, and I have to admit: it works. If you’re willing to go to a session or two a month for forever, you’ll get nice, evenly whitened teeth that look natural but awesome. There’s a few reasons I stopped going (and developed this routine):

I also tried all sorts of laser teeth whitening tricks at home and didn’t find any that worked. Some of them claim to take at least 3 months to start seeing results, but having white teeth just isn’t something I want to wait that long for.

So that’s why I stopped going to laser teeth whitening and instead developed my own at-home guide to having white teeth. It’s cheaper, faster, and easier, and I do my workouts or power clean while my teeth are being whitened, so I’m saving a huge amount of time. I’ve also tried a bunch of at home teeth whitening tricks (like the light, the pen, etc.) and put a lot of work into them but never really saw any huge results from them.

Whether or not we pay attention to it, we’re all freaking out when we have to go to some big function tomorrow and don’t have white teeth. If you follow this method, you’ll never have to worry about it before a big day again!

Here’s my routine on how to have white teeth in a week to get you started. Most of these teeth whitening tricks are easy and inexpensive. If you follow this, you’ll have 100% white teeth in 7 days (or less)!

If I haven’t whitened my teeth in a while, I start off using an activated charcoal toothpaste for a few days. It’s kind of weird because it turns your mouth black, but it’s basically getting rid of any build up on top of your teeth that cause them to look yellow. So once that’s all gone, you can see what color your teeth actually are. Most likely you’ll need more whitening than just this for having white teeth, but I’ve found that if I don’t use charcoal, I can spend a lot of money on expensive products and not see a difference – my teeth are probably white but they’re hiding under this buildup!

Another option that does virtually the same thing is Coconut Oil. If you’ve heard that Coconut Oil whitens your teeth, that’s not technically true, so don’t count on that alone, but it does remove stains/buildup and plaque that make your teeth look yellow. I use Activated Charcoal, but that’s completely a personal choice. Whichever you go with, make sure to use it every day during the first week.

While this isn’t strictly necessary, I find that my teeth look way whiter when I use a really good powered toothbrush. I think it cleans off the stains way better than any manual toothbrush can, but if you don’t want to invest in that then the charcoal over the toothbrush is the way to go. These are all easy teeth whitening tricks that don’t have to cost a ton, even if you don’t see huge benefits.

Add in some Crest Whitestrips. I was never a huge fan because they’re a lot of money and I saw little results, but combining them with everything else I use I now see a huge difference. If you’re wondering how to have white teeth in a week, Crest Whitestrips are a huge part of the answer. I’ve tried all sorts of other at home products, and to be completely honest, nothing has come close to Crest Whitestrips. Here’s the thing about them: the more expensive, high-powered ones you get, the less you have to use them. So if you only want to whiten your teeth with Whitestrips once a week, I recommend the Professional Effects or even the 1 Hour Express. I use the Professional Effects personally, because I only have to leave them on for about an hour once a week and they cost a bit less.

If your teeth can handle it, leave any of the 30 minute strips on for an hour to an hour and a half. Crest has released statements saying this is 100% fine to do, and you get double the power for the same price. If your teeth are super sensitive however, I recommend sticking to a lower power (the Gentle Treatment works good for my sister and she has a lot of trouble with tooth sensitivity) and only leaving them on for 30 minutes. It will cost you more in the long run, but if you’re looking for a long-term solution then you don’t want your teeth to constantly hurt. I know Crest Whitestrips aren’t exactly ideal if you’re searching for natural teeth whitening tips, but using them combined with other natural remedies will give you great results that you just can’t get with natural solutions alone (believe me, I’ve tried).

If you’re against using Whitestrips because they don’t stay in place, I know, it’s not ideal. The Professional Effects work really well for me (they last through a 1 hour workout!), but I also know of quite a few beauty bloggers who figured out some awesome teeth whitening tricks: they use their clear retainers (the ones you get after your braces come off) to hold the strips in place or purchase a cheap athletic or dental mold to help. I’m not sure if I would want to deal with something else in my mouth, but if that’s less of an issue for you then consider trying that.

During the first week doing any at home treatment with the goal of having white teeth quickly, I recommend using Whitestrips as much as possible. Keep in mind that you don’t want your teeth to end up hurting too much (or you’ll have to wait another week to continue), so try to toe that fine line. I could use the Professional Effects 3 times for an hour each time and be okay. To get really white teeth at the end of the week, you want at least 3 hours with a decent power. After that, you can typically switch to once a week.

STEP 3: Hydrogen Peroxide (One of the Best Teeth Whitening Tricks Ever)

Hydrogen Peroxide is possibly my favorite beauty supply ever. I use a 4% (although if you’re worried you can dilute it 50/50 with water) and swish it around in my mouth for a few minutes. You want it to get all bubbly (it should after 5 or so seconds). Once it’s bubbly, you don’t have to aggressively swish, it just has to be touching your teeth. Hydrogen Peroxide is what’s used in Crest Whitestrips and almost any bleaching treatment, so this isn’t even a bad copy, it’s the real deal. You could just do this by itself every night and see results. If you’re looking for a budget and natural teeth whitening tips, this is one of the best ones!

There’s one caveat with Hydrogen Peroxide: it can cause minor cankers in your mouth if you’re not careful. I set a timer for 2 minutes exactly and spit it out once that’s done. I do this every night (and occasionally in the mornings) and never have a problem. One time I kept it in my mouth for almost 10 minutes and it didn’t go so great. If you get cuts in your mouth, you can’t use any treatments until they go away or they’ll get worse.

If you’re using this guide as a resource for how to have white teeth in a week, then I recommend doing Hydrogen Peroxide once a day. I also do after I eat or drink anything super staining like coffee or black tea, but I’m not always able to if I’m not home and it’s never been a problem. Later on, you can use it every few days or just briefly in the mornings. It’s a great, cheap way to have white teeth consistently and even out any patchy spots.

If you’re worried about using Hydrogen Peroxide, I also like the Crest 3D Whitening Mouthwash. I wouldn’t say it works as well as Hydrogen Peroxide, but is a good second choice, and you can stick to the same daily schedule (but use the mouthwash for somewhere around 4 minutes since it’s way less powerful).

The Intensive Routine: How to Have White Teeth In a Week

Here’s what I do for the first week if I haven’t whitened in a while:

1. Brush with activated Charcoal or swish with Coconut Oil daily.  Ideally, you’d use a powered toothbrush.

2. Use medium to high powered Crest Whitestrips at least 3 times this week. If you can do an hour each time, that’s the best case scenario.

3. Swish with Hydrogen Peroxide or Crest Whitestrips Mouthwash nightly and after eating or drinking anything staining.

It’s pretty simple, but that’s how to have white teeth in a week, or possibly less, depending on your teeth. You really do have to do all of these teeth whitening tricks combined to get the best results!

Having white teeth in a week is a desirable goal however these results will need to be maintained so that they can last longer. Otherwise teeth may revert back to their old color. For more information, consider this guide on maximizing your whitening results.

My routine is pretty similar to the initial 7 days, it’s just less intense since the only worry is upkeep. I do my Activated Charcoal 1-2 times per week, brush nightly with a high powered toothbrush, floss once a day, use my Crest Whitestrips once a week for an hour, and swish with Hydrogen Peroxide, typically nightly or every other night. Once your teeth get their initial white sheen, you can be a little more lax about exactly when you follow any of these natural teeth whitening tips.

Having white teeth isn’t something you want to be stressing out about just as you have to go to something important, so start a routine ahead of time that you can actually stick to. Between hair, makeup, outfits, gifts, etc., teeth whitening tricks is the last thing you want to be Googling before your work holiday party or a relative’s wedding.

Did you know that about 18% of people choose to hide their teeth in photos? And sure, we have Facetune (which I personally dislike because it reduces the photo quality so much) but there’s still a lot of in-person time when you just can’t fake having white teeth. If you can stay on top of a pretty simple routine and use some standard teeth whitening tricks, your teeth will be one less thing to stress about!